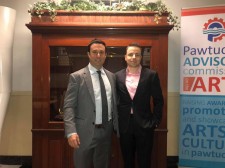 PAWTUCKET, R.I., November 26, 2019 (Newswire.com) - ​​​Nexus Property Management CEO Nick D'Agnillo went before the Pawtucket City Council on Nov. 18, 2019, alongside renowned real estate consultant Michael Leshinsky to promote the plan of developing 27 residential units and three commercial spaces in Downtown Pawtucket. Overall, the Council was excited to entertain the proposal as the total investment in the Downtown will be in the millions. Up for discussion was a 10-year tax treaty that would enable D'Agnillo to bridge the gap on renovation costs. Of the seven City Council Members present, the treaty missed a unanimous decision by just one vote.

When asked about it, D'Agnillo stated, "The Downtown is a skeleton of what it once was. Nexus bought this building five years ago with the intentions of bringing residents to an area that doesn't see much action after business hours. We appreciate the City's backing, and look forward to our other neighbors jumping in as well."

Downtown development has been stagnant for decades since the end of the Second World War. When the soldiers returned home, the suburban housing boom began leaving "old fashioned" cities like Pawtucket and Woonsocket gutted from the inside. Most cities and towns like this across the United States have struggled to restructure their identity. D'Agnillo is now leading the charge to change the face of Rhode Island's fourth-largest city.

"Nexus was born in Pawtucket, and we are excited to contribute to the rebirth of the Downtown. Also, don't hold me to this, but I also plan to buy other buildings in the Downtown area, and open up a restaurant called 'CHANCE.' The restaurant will feature top industry chefs, and not let you pick your meal at all. The chef will deliver all courses based on their preferences and tastes. How cool, right?"

Under D'Agnillo's leadership, Nexus Property Management has been able to expand its business into four states in a very short amount of time.

"My plan is to get a Nexus office in all 50 states by the end of 2029. It is a lofty goal, but we have the team, systems, and motivation in place to make that happen."

For anyone interested in speaking more with Nexus CEO/founder Nick D'Agnillo, contact his GM, Gregory J. Rice, at Gregnexusleasing@gmail.com for all interview and booking requests.